Blame it on the Blemishes 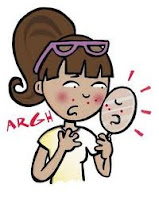 I have an important motto I've made up myself that is related particularly to the raising of children. At least I think I've made it up.

It didn't occur to me quite away because, frankly it wasn't needed. It occurred to me when Bar Mitzvahzilla went from being a smooth-faced twelve-year-old several years ago, into a raging, hormonal thirteen-year-old. And then the pimples came.

It was a normal night. The kids were up too late. The husband causing a ruckus in the house because those same kids had managed to mess up the house in the most minute ways; ways that seemed intended to drive us to the brink of insanity. I was hiding in my office, trying to get some writing done and wondering - lamenting - why my office didn't have a door. Oh yeah, I know. Because it's the living room.

Then Bar Mitzvahzilla marched in for a goodnight kiss. No knocking because, of course, there was no door.  He presented a face full of pimples for me to kiss. And I, of course, kissed the pimples.

It's not like I spent my life purposely kissing pimples. The common wisdom when I was heading into high school was that you could catch these things if you made out with a boy who had them. Since I already had enough of them to send makeup counter ladies running in horror from their stations in the mall, I wasn't going to purposely rub faces with someone who had worse pimples than me. There was also all the other stuff we believed about our skin right then: chocolate causes pimples. Rubbing alcohol will cure pimples (topically, not as a drink...). Use a blackhead popper on your pimples (hello, scarring!). We even believed that one day soon we'd grow out of them.

And, just like my nascent belief, as a teenager, in the fact that a ten-pound weight loss could change my life, I also believed that if I strategized just right, I could declare war on the pimples, and fix my social life.

I don't think Bar Mitzvahzilla was philosophizing quite as much as I had, as an adolescent girl. But he did march into my office for a kiss. So here's my motto, reiterated in case you missed it, used in the fullness of loving parenthood: Kiss the Pimples. And then get that kid to a dermatologist.

Any horrible acne stories from your youth? Archaic beliefs or practices? Any experience with this situation? Anyone else spend a lot of time in the dermatologist's office and not for Botox and Juvederm?

Linda Pressman, Author of Looking Up: A Memoir of Sisters, Survivors and Skokie
available on Amazon, Kindle, Barnes and Noble.com, libraries and other retailers
Posted by Linda Pressman at 10:03 PM