I Drive, She Whines 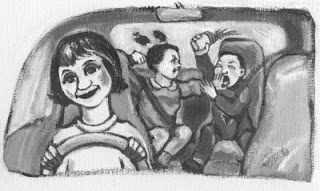 On Saturday, Daughter and I dropped Bar Mitzvahzilla off at his cousins' house far, far, far across Phoenix. It's a multi-freeway drive to get there, but Bar Mitzvahzilla was going to have a complete nervous breakdown unless he got to go.

This is because things are pretty cool over there. Unlike our house, which is like a lockdown prison since we took away his PlayStation, over at his cousins' house he gets to game until his eyes roll back in his head or until his thumbs sieze up in attacks of tendonitis. First he and his two cousins murder and commit mayhem on the XBox or PlayStation 3 and then, when they're done killing on the screen, they grab their Nerf guns and stalk each other down the hallways of the house. This is supposed to be fun.

But once we got there and he flew out of the car, after he and Daughter battled the whole way there, it was just Daughter and I out for the day with a little extra time. I immediately thought, Free time!  No teenager nagging me to death. A world of possibilities opened up.  Should Daughter and I go shopping to a far away store?  Should we go hiking on one of the pretty Arizona mountains?  Should we go for a drive, a walk, have a nice chat?

So I drive, she whines, all the way home.
Posted by Linda Pressman at 11:07 AM