The Better Version of Me 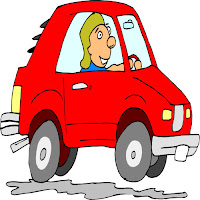 Bar Mitzvahzilla is in the summer football strength training program for the high school he'll be attending in the fall. We're carpooling with a neighbor whose son is also in the training and this neighbor and I have marvelled in the past at all the things we have in common. We drive the same car. We live in the same neighborhood. We're both from Chicago. Both of our sons were preemies but are fine now. There are other little things.

So the other day was my first time to drive her son home from training. He got in the car, pushed over some of the garbage Daughter had scattered all over the backseat and I say, jovially, I think, "This car is just like your mom's. Just dirtier."

Then Bar Mitzvahzilla looks over at me with a smug look on his face. He says, "Yeah mom, except for her GPS and DVD player."

"And her car is spotlessly clean." The absolute joy of having a teenager! First he destroys the car by spilling every known object and food in it, and then he insults me for having a messy car. And the joy of needling me!

I look at him.

The neighbor kid, a polite person, unlike my son, pipes up from the back, "My dad can't stand for either of our cars to have a speck of dirt on them so he gets my mom's car cleaned every week."

It's then that I realize that my neighbor is actually living the better version of my life. Her car, while the same model, is highly upgraded and clean. Her husband, a neatnik, keeps it clean. She has a high-powered executive job and I am, um, whatever this is. She has a weekly cleaning lady. I have to trade Bar Mitzvahzilla time on his Xbox to get the toilets cleaned. Final proof: during the break between summer sessions, their family is going to Vancouver, which is in Canada; we're going to Flagstaff. If you don't know where that is, look at a map of the State of Arizona. It's where I-40 and I-17 intersect. Not quite as glamorous.

I drive back into our neighborhood, dejected. As we turn the corners to swing around to their house - a basement model of my one-story with about 500 more square feet - all the garbage in the back of my car shifts and crunches with each turn. There's dead silence except for the movement of the garbage.

I drop him off, make a U-turn and my kids and I make our filthy way home.

Did you ever feel that your life might be mirroring someone else's, but not necessarily in a good way? Do you ever feel like certain components of your life are evidence that your whole life is a wreck - like me and my wreck of a backseat? Ever raised a snotty teenager?
Posted by Linda Pressman at 11:28 PM