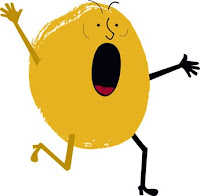 My mom was in charge of making the latkes - potato pancakes - for the family Channukah party at my house last night. Would the latkes make it to the party?

All day I was subjected to a barrage of phone calls advising me about the latkes' progress.  First it was the sheer volume of the potatos - how many pounds - twenty, thirty, a truckload? Then the misery of the peeling.  The agony of the chopping and the woe of the grinding.  I was happy to hear that she wasn't using a hand grinder anymore but still, she was out of date, using a no name blender that she bought with S&H green stamps in the 60s.  It broke in the middle of grinding.  Could I bring her mine?  Sure mom, I'm just getting the house ready for the fifty people who are coming over tonight. No problem.


While over there I saw the latke factory she'd set up:  her ancient, black, ten-thousand pound skillets sitting on her uneven electric coils.  The cooking spray she had pulled out of a cabinet to convince me it'd be safe to eat her latkes even though the pans were coated deep with oil. The latkes, after fried, sleeping smashed and smushed on top of each other in casserole dishes in her oven melding into one huge, square latke, the super duper latke of my dreams, coming to my house in three hours.

But would they make it?  My mother had been sick and holed up in her house for two weeks.  She'd been avoiding all fresh air since she was certain that air was the cause of all her problems.  How would she manage to get to my house without breathing the outside air?

She drives over, the latkes steaming in her car, the serving dishes wrapped in towels - some secret old country method of heat-preservation - and then she gets trapped at the gate into my neighborhood.  It's not like I'd actually expect her to be able to enter a gate code.  I don't.  I know she and Stepfather could never in their lives figure out what a pound key is.  Something about the key pad and telephone hanging there just don't compute with them; apparently, they expect an operator to get on the line.  To avoid this, I gave them their own gate opener, which they still can't manage to operate.  Pretty soon there are people backing up behind them all the way onto the main street.

So she calls me from her cell to tell me she's trapped.  Can I leave the party and lope out there with my gate clicker to open it for her?  Can I send Bar Mitzvahzilla out there on a latke rescue mission, looking for Mom and Stepfather in her souped up Toyota Matrix and let them in?

Suddenly she says, "Oh, never mind, Linda.  The gate is opening!  It worked!" And she hangs up on me, the Toyota - latke express - creeping along on its way till she pulls up.
Posted by Linda Pressman at 10:37 PM