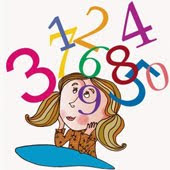 The four of us - Husband, Daughter, Bar Mitzvahzilla, and me - were stuck in our car for a while tonight driving across town for a play, and here's the interesting thing I suddenly remembered about being in a car with Daughter:  she doesn't stop talking.  If she's got an off button, I haven't found it in the ten years since she was born.

Well, no, actually, we weren't aware of that, but -

And then she's off and running.  The multiples of seven up to eighty-four.

So we give her the requisite amount of attention for her speed multiplying and then, while she's taking a breath, we try to resume our conversation.  Of course, we're not going to be that lucky because she's not taking a breath just to breathe or anything.  She's taking a breath so that she can start reciting multiples of nine and then fives and then twos.  And the twos she can recite to infinity.

Husband and I give up on our conversation.
Posted by Linda Pressman at 1:24 AM