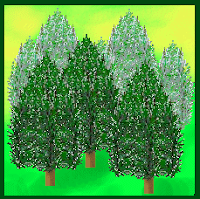 My mother called me up recently to tell me she had heard about a movie about the Jews who had hidden from the Nazis in the forest during World War II, just like she had. Have I heard of it?

She runs all these things past me because I'm the Super Jew in the family. Of course, there's a very low bar on Jewish adherence in my family. In this family, just subscribing to the Jewish newspaper means I'm some kind of Jewish fanatic.

But I do keep on top of the Jewish world, so I say, "Sure, Mom. It's called Defiance. It came out awhile ago - over six months. I just bought it on DVD."

This gets her very excited because if my mother can combine her two favorite things in the world, the Holocaust and television, this is a good thing indeed.

She says, "Can I borrow it?" And I say yes even though I haven't watched it yet. I bought it because of my family's history and because I know I should watch it, but, really, I have no intention of watching it. Having been raised in my mother's Holocaust immersion school of child-rearing, I can't stand to purposely subject myself to it. But to my mother? Pure unadulterated pleasure. Nothing can be better than two hours of complete abject misery - watching and crying, crying and watching.

I bring it over to her house and she says, "Oh, good! I'm going to watch it right now! Can you put it in the machine? You want to stay and watch with me?" I swear part of her thinks that maybe she'll see someone she knows.

Of course this wasn't even tempting to me. I say, "No thanks. Two hours of Jews being chased through the forest by Nazis who are trying to kill them? That sounds like my childhood."

"What? You were safe in Skokie!"
"Ma! You told us about it everyday in Skokie!"
"Oh."
Later she tells me she watched but she didn't like it very much so she stopped before the end. It wasn't exactly what she thought it would be like. It wasn't exactly about the part of the forest she had lived in; the family portrayed wasn't exactly like her family; they didn't live through exactly the same experiences she had lived through. So when another of my sisters came over to her house, my mom loaned my movie to her.
Then she turned on Schindler's List instead.
Posted by Linda Pressman at 11:37 PM