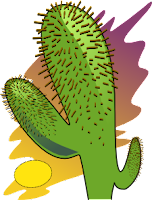 My mother has returned from spending the summer in Northern Arizona. After calling me all summer and making fun of Phoenix for being too hot all summer - which was her way of inviting me up to visit - it finally got too cold up there and she returned home.
Because I live the closest to her of her seven daughters, my mother calls upon me for general house maintenance and run of the mill slavery while she's in Flagstaff. There's the dead and dying arboretum in her front yard that she calls landscaping and which must be tended to. I don't take care of it, I just call to tell her when, finally, her last living cactus has keeled over and whether it's hit the house. Also, for some reason, my mother and stepfather don't fully understand the idea of stopping the paper when they leave for three months, so I have to swing by, pick up the papers that have accumulated on the driveway, and throw them behind her front pillar. After a long, hot summer, the shade behind the pillar and her leaky hose, it turns out I've pretty much started a mulch pile.
Since my mother is elderly, there's no imposition that she won't foist upon me to make her life easier and my life harder. The newest one, just invented this summer, is that now, when she's driving down from Flagstaff, she wants me to pop over to her house and turn on her air conditioning so it will be cool for them when they get there. I need to do this at exactly 9:00 in the morning. They've timed this exactly. They'll be there at 11, which will give the house two hours to cool off from a summer with the air conditioning off. So she wants to know - is there a problem? Can't the kids go to school at a different time? And what do I mean, I need to be at exercise at 9:15?
The next thing I knew, she was back in town but there was dead silence, unusual for someone who usually announces her presence with, "What, you can't come over to see me? You're so busy?" Both her home phone and cell phone were malfunctioning. I left a message on the cell even though I know she's never figured out how to retrieve them.
By the time I got to her house, another sister was already there. She greeted me with cries of, "Oy, Linda! You're so skinny! A size four?" This is actually her standard greeting or farewell comment. When we were leaving she said the same thing as a goodbye to my sister. "Oy, Eileen! You're so skinny! A size four?"
She's back home. Her ringer's back on. Her house is cooled off. The TV's turned on to something that keeps her up at night, like a Holocaust special. Things are back to normal.
Posted by Linda Pressman at 11:24 PM