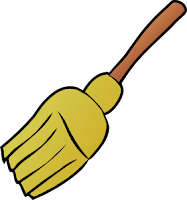 Even though Bar Mitzvahzilla would prefer to live his life with his nose in a fantasy/sci fi book, or with his thumbs on a PlayStation controller, since he turned fourteen he's had to do one new thing: he's a carpet store employee.
Unfortunately for Bar Mitzvahzilla, since we own a carpet store and Husband slaves away at this carpet store (I do the glamorous administrative work from home) he got this automatic part-time job the minute he turned fourteen and could be put on the payroll. Of course, if he had applied for the job, he would have been our last choice: a lazy, reluctant fourteen-year-old boy? No. And somehow, the $10 per hour pay, despite having a very lenient boss who loves him enough not to fire him, despite having the other employees treat him like the Heir To The Carpet Store, Bar Mitzvahzilla can't stand going down there.
Of course, I can relate to this. I come from a long line of working class merchants. One of my grandfathers was a shoemaker and the other owned a tiny trucking company. My own father owned a commercial laundry in Chicago and a produce market in Arizona. He believed wholeheartedly in his children working at his businesses. He just didn't believe in paying us.
Luckily, I was dying of asthma in Chicago and so completely weaseled out of working at the laundry. But no such luck with the Arizona produce market. I got reasonably healthy once we moved to here and, once my Dad died, I was shackled to our store as readily available teenage labor. Rate of pay? All the produce I could eat.
So I try to put a cheery spin on it for Bar Mitzvahzilla, telling him how lucky he is that he's got a job and Husband's so patient and actually pays him in money, not carpet, to work there.
But Bar Mitzvahzilla fails to see it my way. He insists on reading and working at the same time. He takes the broom in one hand, a fantasy sci-fi book in the other, and then he swings the broom across the floor, scattering dirt and dust and carpet fibers everywhere. He rests the broom for a second against the counter so he can turn the page of the book, and then he starts reading again. He picks up the broom with his free hand and swings it again.
I escape, leaving him to the Wrath of Dad.
Posted by Linda Pressman at 10:49 PM