A Life in Fifteen Lines or Less 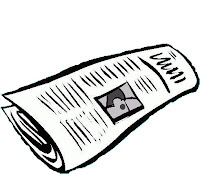 From time to time I read the obituaries. Like just in case someone I know has actually passed away and I didn't know, or because I'm a writer and I read between the lines - looking at the birth and death dates, the life histories, the old people whose obituaries are accompanied by their picture from World War II. And sometimes I read them because we just need to pay attention. They're there and they memorialize someone's life and I can give them my time.

So I was really surprised when pricing obituaries yesterday, how much it costs to run one. Two hundred dollars for one day and fifteen lines. More for extra days and lines, and even more for a photograph. Somewhere in my naive little mind I thought these ran as community announcements, as community service. Not as ads.

If you read this blog back in 2009 and 2010 you may remember the madcap adventures of the elderly in my life - my Holocaust Survivor Jewish mother and my Ohio Farmer Methodist Stepfather. Her yelling and his deafness, which actually made an ideal combination; his constant puttering, gluing and winching, involved in dozens of mystifying projects around the house, like gluing together ice cube trays and winching broken laundry baskets, because nothing ever needed to be replaced, yet the house was still falling down around their heads. And my mother sat in her place on the couch in the family room, phones and remote controls in front of her - her command center - the living switchboard of our seven daughter family. Who knew those were the good old days?

But then there was decline and a decision that our mother needed to live with one of us due to her need for twenty-four hour a day care. Stepfather did not want to make the same move. He continued puttering about the empty house, still busy with projects, with ham radio, with driving his truck fifteen miles an hour down the road seeking garage sale finds. I saw him often, brought soup. But still I thought, he's 87. He can't live there alone forever.

There were a lot of options available to him, one of which was to move to be close to one of his daughters. And I swear he was alive and well this past January as he shuffled off with his kids, the yard sale items with which the house had been filled compressed finally into six suitcases and a mobile mini.

And on May 9th I was on a website trying to figure out how to condense the life of one man into fifteen lines and one day and found that it is impossible.