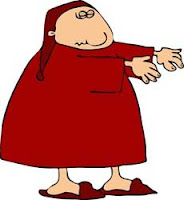 I've been doing a bit of clothes shopping lately. Since we only have two seasons in Arizona, one short and one really long, my summer clothes wear out pretty fast.
There's this tiny, little season we like to call "winter" when I pull out the heavy part of my wardrobe. This is the season when winter visitors come to Arizona and practically wear bathing suits in the streets, acting like it's hot out, while I'm contemplating whether I'll look dumb wearing mittens when it hits 50 degrees. It turns out I will look dumb.
Then there's summer, which is the rest of the year. During that season it's really too hot to wear any clothes at all but people do rather than strut around naked. Clothing is painful in 115 degree weather, no matter what you're wearing. And when you add in the vagaries of some pre-menopause-type symptoms, we're talking several shirts a day.
And this is why I'm shopping this year. This year my aging body has new needs and last year's summer clothes just won't do.

I was fat from age 15 to age 40 - that's 25 years, from 1975 to 2000. I pretty much missed all the fashions for all those years because even though I told myself I could wear the really gigantic size of all the pretty styles, once I put them on in, like, a size 20, I looked like a wall moving down the street. When I was fat, I preferred to dress like I was invisible - in something to camouflage me. I preferred to wear black from head to toe so that I'd look like a black hole of anti-matter and people would just look away from me and onto the next, more colorful, person.

So I missed all those styles and, just my luck, when I lost my weight at 40 it was too late. First of all, I found out I had no real sense of style at all. I stumble into my closet every day and come out with the same thing on, a top and a bottom. The same combination I wore when I was fat. Never a bracelet, never interesting earrings, never a scarf. Second of all, I found that I couldn't just let myself dress out of my age group. I can tell when I look dumb.

And now there's the new problem with my arms.

You know when you're young - like 48 - and you look at your mother's arms which are all wrinkled up and you think, "Wow - I hope my arms will never get like that. I'm sure they won't because I'm part of this new generation and we refuse to age!" - or something like that? And then you turn 49 and you're kind of blind because you can't see far and you can't see near and you put on a shirt and there's this line in the mirror and you can't really make out what it is so you look closer and closer and closer, and, guess what? It's the big wrinkle from your mother's arm.

So I had to go shopping. There was a choice to make, after all. Was I going to listen to the burning hot, menopausal voice inside of me telling me to to take it all off, or was I going to listen to my new visitor, the wrinkled zombie, who was telling me to cover it all up? I experimented a little in front of my mirror and I realized that if I modify my clothing a bit and then hold my arms just in front of me a little when I walk so the wrinkles fall backwards - kind of like a sleepwalking zombie - my arms actually look great.

And that's working for me now - the sleepwalking zombie look. We'll see about next year.

Posted by Linda Pressman at 1:07 AM