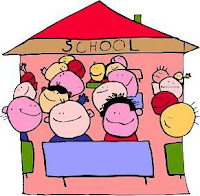 My defensive driving class wasn't that bad this time. It was bad in the way that it was 5 hours long, the room was ice cold on one side and heated on the other side, and it was pretty much lit with strobe lights. But it turns out that I'm now so old that I can kind of reminisce about all the defensive driving classes I've had, and compare them all to each other, grading them on a scale of overall human misery.
Like, was the instructor a pompous, overbearing ass who treated us like pond scum for getting a ticket, acted like a drill sergeant about breaks, lambasted us with threats of dire consequences if we went to the bathroom, like the last time I took the class? No, this class was taught by a sweet old man wearing a bolo tie, whose assistant, his sweet, befuddled and mummified wife, cued him on things he forgot or what he was supposed to lecture on next.
Were there a lot of belligerent, angry strangers, mad about being stuck there for five hours, mad about getting their photo radar tickets, mad about being spied on by the government, mad about the fee, or mad about the bad picture the photo radar took of them, like the last time I took the class? No, I took the class in Scottsdale and it was a pretty mild crowd. We took to our sweet old coot, kind of adopting him. We didn't want to hurt his feelings.
Were there a lot of accident fatality videos intended to scare us to death so that for weeks we'll be paranoid about driving, paranoid about seatbelts, paranoid about kids in the car, strapping them in with extra rope, paranoid about red light runners, paranoid about passengers, paranoid about lawsuits, paranoid about alcohol, even paranoid about driving under the influence of an aspirin? Yes, just like every single time.

So I sat there, refreshing my horror at all the dangers out there, at how my sweet little car, the car I lovingly call my pony is actually a dangerous piece of heavy equipment, then, at 9:30 pm, we were set free to wreak havoc upon the roadways. I creakingly pulled my car out of the parking lot, crept up to the first stop light looking for the horrors of a red light runner, fearfully drove home watching for lane changers, speeders, drunks, drug addicts, rear enders and sideswipers, and especially for photo radar.

Then, after taking about an hour to drive the two miles, I successfully got home.

Posted by Linda Pressman at 2:17 AM