Stuck In The Middle with Bar Mitzvahzilla 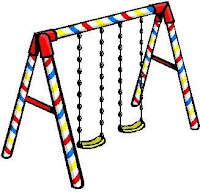 Once I had a tiny son who could be brought to any park in the world, unsnapped from his car seat, and, like a revving engine, set down and he was off. Rolling in the grass, playing in the sand, kicking balls, head first down the slide, chasing kids he didn't know, an ape on the jungle gym, and swinging into the sky. He could go and go and go - all day and all night - his battery was always charged. His fun would only end when we hunted him down and lured him into our car, the seat belt click sounding the end to his freedom.
But things change when you have a son who's nearly fourteen.
I used to love sitting on a park bench reading or writing while the kids played safely nearby. Now I'm no longer alone. Next to me sits a silent, brooding teenaged lug, along with his man-sized body, his gigantic arms and legs, his big feet, and an alarming blonde moustache. He apparently is too old for the park. He's too big or too old for every single thing at the park except for sitting there next to me on my bench.
So since he can be a little conversationally challenged, I've thought of a series of questions that I can ask him that will set him off on a twisting, winding, conversational labyrinth that won't stop until my eyes roll back in my head. What's the coolest new video game on the market? What's his dream car? (He aims high - it's a Lamborghini.) Which one's the best Terminator movie? Who had the coolest light saber in all the Star Wars movies? If I can stand to stay awake for the answers I can at least hear his voice.
There are some things he will still do. He'll play basketball anytime and anywhere. He'll surf like a beach bum in the ocean but first he has to find some ocean in Arizona. He'll swim in any pool but lately he wears a t-shirt, hiding something on his upper body. I figure it's probably one valiant, newly-sprouted chest hair, but won't I be the fool if he has a Siamese twin growing under there?
He reads books obsessively, but no book that any girl anywhere in the world has ever said she likes. The blood and gore and confusing Sci-Fi plots take care of that. And he plays video games with such intensity that if I didn't tell him to stop he would actually never stop. He'd forget to go to college and forget to get married. He'd only stop decades later when his hands froze with arthritis on the controls, the house disintegrated around him. Then he'd yell through the rubble, "Mom! What's for dinner?"
Stuck in the middle with Bar Mitzvahzilla; he's not a boy and he's not a man.
Posted by Linda Pressman at 11:05 PM