The Merchant of Phoenix 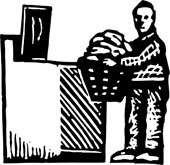 I come from a long line of merchant Jews. We're kind of the middle class type Jews, not the rich ones and not the Torah scholars. We're the ones who own stores and laundries. As a matter of fact, my father owned a laundry in Chicago. My grandfather? A shoemaker. My great-uncle? A tailor. My great-grandfather? A woodcutter. Like in Little Red Riding Hood.
Once my relatives came to the United States, they were a little pushy about their occupations. They knew that the riches of America were theirs for the taking, but first they had to take them. That meant that they had to let people know what they did for a living, how their product or services could change the customers' lives, how things could be so much better with clean laundry, a well-made pair of shoes, or a finely tailored suit.

Of course, I was mortified by my relatives. I felt if they had just been American-born, they would not have been so pushy. They'd have been more polished, more reticent, maybe less embarassing. To me.

Since I'm a little slow, I want to tell you what I figured out today that made me think that maybe I have to be a little pushy today on my blog. On Poetica Magazine's website where I'm the Blog Editor, I'm hosting a writer this week who writes quite movingly about interviewing children of Holocaust Survivors and how she's spent some time reading the literature they've been producing. So all day long I've thought, "Oh, that's me, right? Children of Survivors and the literature they're producing. Me." Gulp.

And since I realize that Holocaust Survivors like my mother are becoming rare and soon all the world will have are the children of survivors and the stories we have of growing up with our parents, I wanted to do something I would normally shy away from doing: direct you to two venues where my writing is appearing in March. Even though that's, um, pushy.
I haven't written too much on this blog about how crazy it was growing up one of seven sisters in Skokie, where it was assumed that my mother was deranged for not stopping at two children. After all, what was she trying to do? Repopulate the world after the Holocaust? One of my stories, called "Seven Sisters," an excerpt from my (unpublished) book Seven Sisters is appearing on my friend, Sandra Hurtes', website for the month of March. Spend some time while you're there looking at Sandra's work. She's a brilliant essayist and child of Holocaust Survivors whose work has appeared in the New York Times, the Washington Post and is forthcoming in Poets and Writers. I highly recommend her collection of essays, On My Way to Someplace Else, which can be purchased on her website.
If you can imagine what it was like having parents whose greatest thrill was going on vacations to visit other Holocaust Survivors all across the country so they could sit and cry for hours over all the misery in the world while their children stuck to plastic-covered sofas, then you can imagine what my childhood was like. A story of mine about vacations with my parents, called "Holocaust Vacation," is being published in an anthology of the work of Children of Holocaust Survivors coming out in March, called Mizmor L'David (Psalms of David). Even ignoring my own work, the Anthology is filled with some fascinating cutting edge work from writers who are children of survivors.
There, I did it. Now we'll get back to our regular programming.
Do you come from a long line of merchants, like me? What are you doing with your writing life? Any ambitions? Does anyone know a great literary agent?
Posted by Linda Pressman at 11:32 PM