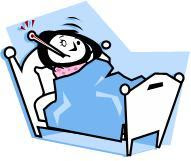 Daughter's been sick for a few days. But even though I know it's just a couple days, I'm sure there has to be a better unit of measurement out there - like Dog Years - because each day that Daughter is sick feels like a year. At least to me.

What is it about her and illness? She gets a stomachache and it's absolutely, positively the world's worst stomachache ever and she will not live through it. She lays around moaning and groaning half the day. If she hurts her arm, she gets out a sling; if it's her foot, she gets out a crutch. She's a Drama Queen.

This time her illness is real, not feigned. She has a pretty bad virus. When the doctor's office told me at our emergency Saturday appointment today that it wasn't strep, I was more shocked than Daughter was. But if you take Daughter, add one sore throat, one stuffed head and multiple rounds of sneezing, here's what you get:  a twenty-four-hour a day nag festival.  She can't sleep so I can't sleep. She's going to choke on her swollen tonsils and die if she falls asleep. For sure.

I was a sick little girl at from eleven on. I got asthma very suddenly and it really did end my life as I knew it. I missed half-years of school until we moved to Arizona, and when I did get to school I used to creep around the halfways slowly, my back hunched over like an old lady, no air in my lungs. My mom used to schlep me up to Gurnee, Illinois once a week to the only doctor near Chicago who had a nebulizer machine - the ancestor of the nebulizers people have now. This one took up an entire room. I sat there for an entire afternoon, breathing.

And through all of that I was uncomplaining. I figured everyone had something to bear. In the pediatric asthma offices where I was treated a lot of the kids had horrible, permanent illnesses. I knew, despite the fact that I couldn't breathe, that I had a lot to be grateful for. If I, my mom, and the neaderthal nebulizer could just get my asthma under control, a normal life awaited me. None of that would be true for all these other kids.

Apparently, Daughter does not have the ability to glean the same lesson, certainly not from a virus. Or maybe she's just not seeing sick enough kids in her pediatrician's office. She flomps down on me, miserable and miserably sad for herself. She coughs in my face. She finally goes to sleep.
Posted by Linda Pressman at 11:14 PM