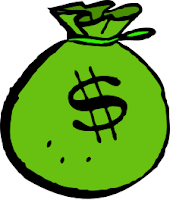 Husband had a Big Birthday yesterday. While I blab about my upcoming 50th birthday all over the place,  he's a little more touchy about his which is - do the math - five years older than me.

We did all the obligatory family celebratory things: Bar Mitzvahzilla, Daughter and I all drew him handmade cards. We planned a romantic, candlelit dinner, but then realized the kids wanted to come along. They were unsympathetic to our desire to be alone. Weren't we alone every single night at bedtime?

Then, after our celebration was through, it was time for Husband's Lamentation, a yearly ritual he must go through, tormenting both himself and me about why he's not a millionaire yet.

I don't know if this is just a guy thing, but each birthday since Husband was about 45 he has moaned and groaned about how rich he should have been by each respective age. Millions and millions of imaginary dollars should have been in the bank, apparently. And, again apparently, as he casts a withering glance my way, it's all my fault.

I have to withstand the glare because I guess it's true. I've spent all the money. I don't think it would have been millions, but I'm responsible for some significant portion of frittering. Over seventeen years of marriage, who knows how much?

There's the ill-advised vintage Barbie collection in our den gathering dust, something that seemed like a good idea twelve years ago when I was in my second bout of infertility inbetween having the kids. There's the fact that we have enough furniture in the house to fill a house twice this size, that there are enough pictures standing along walls to fill walls twice as high, and the fact that I have enough clothes - all from sales racks - to change my shirt several times a day and never run out.

But here's how men and women are different. When I hit my birthday each year I think, "I should have had a book published by now," or some other miserable writing related mantra. I never think that I should have been a millionaire. Truly, growing up with as much deprivation as I did, I'm amazed every day that I have any money at all. Only a man would think that.

I try to look on Husband lovingly and benevolently during this time period because I know it's tough on him, this longing for Money That Never Was. And I can afford to be nice right now anyway. For this six-week time period, from January 22 to March 7th each year, I'm actually six years younger than him each year instead of five, a youthful babe to his doddering old man. Who can blame him for festering?

Do you have an achievement lurking in your mind that you expect to accomplish by a certain age?  Does your spouse or partner have a completely different goal? Is it monetary, fame, success, love, happiness, or what?
Posted by Linda Pressman at 12:48 AM