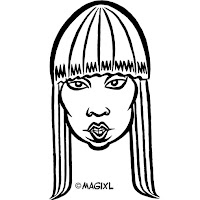 I've been married nearly eighteen years so there's a bit of amused tolerance that goes on in my marriage. Husband, on the one hand, has gotten accustomed to the fact that I have more shoes in my closet than a normal human being could reasonably expect to wear in a year and that, while I have bright ambitions for the clothes I buy, later I can't quite remember what they were and end up dressing like an idiot every day.

And I have amused tolerance for his music. He's a rock and roller and a music snob. He loves classic rock, which, of course, I was raised on too, and has in turn raised our kids on the Beatles, the Stones and all sorts of other 1960s music. He also took up guitar lessons about a year and a half ago and began composing songs that seemed a little personal, odes to me, with names like, "She's Impossible" and things like that. Okay, fine. I could live with all that.

But lately he's gone gaga for Lady Gaga and this, I have to say, is unexpected.

This didn't happen overnight. It also didn't happen without some resistance on his part, and complete investigation of the Gaga oeuvre, as it were. And even though he's confident about his fan status he's still connected enough to reality to be shamefaced about it, to his credit. After all, it certainly didn't happen because she wore a bunch of funky masks to award shoes or outfits that looked like performance art, which is more something I could appreciate. It happened because of raw talent.

First he heard her song Poker Face. An acoustic version that appeared on the BBC. Then he realized that she wrote it and all her own songs. Then he started searching YouTube (note to self: should never have shown Husband that YouTube existed) and he found videos of Lady Gaga in her former life as Stefani Germanotti sitting at a grand piano playing beautifully and singing riffs of her own songs with a scope and talent not exactly born of her years.

And that was it. The next thing I'm expecting is to open the mailbox and find one of those fan club packets I used to get in the 1960s for the Partridge Family or the Monkees. You know, with a button, and ID card, and a fake autographed picture of the object of your obsession.

Yesterday - like my life has become a cartoon or something - my fifty-five-year-old husband says to me, "Did you know that Lady Gaga was here in concert on July 31st? We could have gone!" In slow motion I look at him. I lift my hand to see if maybe he's running a fever. I've spent my entire married life trying to avoid all the concerts he wants me to go to - John Fogarty, Bob Dylan over and over again, and I went, even when Dylan didn't sing at all the entire concert. One time, years ago, he made me go to The Grateful Dead. And now he wants me to go to Lady Gaga?

I try to see the bright side of it. At least it's something we can go to with the kids. Right?

What do you have to look on with amused tolerance at with your spouse or partner? Have you fallen in love with any music lately that seems younger than your age but love it anyway? What about this Lady Gaga thing?
Posted by Linda Pressman at 11:08 PM 27 comments: 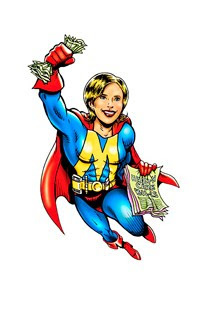 When Bar Mitzvahzilla was younger, there was one question he loved to ask me that I never could answer to his satisfaction, yet about which he and Daughter could jabber about for hours. What superpower would I choose if I could have one?
Well, of course this stumped me. While he'd look at me expectantly - just waiting to give me his answer - I'd draw a blank. Invariably I thought of Bewitched and I Dream of Jeannie. What superpowers were those?  Since I had to come up with something I'd say the only one I could think of, immortality, and be subjected to my son's scorn. Why in the world would I want to live forever when none of the people I loved would be able to? That was apparently the worst superpower. The best ones? Mutability, Invisibility, Superhuman Strength.

If he asked me today I wouldn't have any problem picking one. Easy. All I'd have to do is think back to the last three weeks since he started high school, since I've looked at my planner each day and found that each one of them contained unresolvable conflicts - two places I actually had to be each day at the same time. Both things invariably for my kids. And important stuff.

So I know which superpower I'd pick: cloning.

Was I living in a cocoon all these years, being the mother of two kids who attended the same private school? The ease and comfort of driving both kids to the same school, having one school calendar, of only having to beg with Husband each morning to take my assigned driving days because, invariably, I had stayed up till two in the morning blogging.

But not anymore. Now Bar Mitzvahzilla has to be off in one direction to arrive at 7:30; Daughter in another to arrive at 7:55. There are the things that we planned that sounded really good during the summer, but in practice? Not so good. Like football everyday after school. Then various Jewish or school-related activities that keep the boy and me hoofing it till 9:00 each night. High school, then home; JCC, then home; tutoring, then home. And back. This, I believe, might just be why people actually buy their teenagers cars.

But here I am, finally. Able to blog after a week and a half. Three whole posts this month.

Now I'll go disappear into my genie bottle until tomorrow.

And what would you pick for your superpower? Ever felt like you've spent the whole day driving, and you weren't on vacation?
Posted by Linda Pressman at 10:21 PM 19 comments:

You can reminisce all you want about the good old days of Spiderman pajamas. About the days when your little boy got a pair of Spiderman gloves and really, truly thought he'd be able to climb the walls of his room. And fell down a few times trying. You can forget about all the Camouflage clothing you bought him too. That was so middle school, after all, him being dressed head to toe in camo, his backpack matching camo, to the point where some days I wasn't even sure I could find him, he was camouflaged so well.

He's in high school now and there are a whole new set of rules.

First of all, no camo. Second of all, he's only allowed to wear one type of shorts: basketball shorts. And those must hang down to his knees. He can wear them in any ridiculous color under the sun (except girly colors or camo, of course) and with t-shirts. But the t-shirts have to pass inspection. While the mom inspects for inoffensive language and no gang symbols (like I'd recognize them), the high school kid inspects according to a different standard: cool. I'm clearly out of my league on this one.

Then there are the accessories. First of all, the wheelie backpack got wheeled away before 8th grade. Apparently it doesn't matter how heavy his backpack is, how many textbooks have to come home with him, how damaged his vertebrae, he must carry the load on his back like a mule. Secondly, no more lunch box.  Lunch boxes are only for middle school. Even paper sacks show a little too much effort. Any lunch preparation from home has to look haphazard, not like we tried too hard. Hopefully, I guess, it should look like we didn't try at all. We need to throw everything in a plastic grocery store bag.

No juice bags or juice boxes. Obviously. He now can only bring cans of soda or bottled water. You guessed it - anything else looks nerdy. I'm afraid to ask about the bags of chips. Do I need to open them up and randomly throw them in a baggie, maybe step on them so they're a little crushed?

I don't ask the question. I don't want to hear the answer.

Have you ever navigated these cool/uncool waters with your kid? Had a kid at one of the transitional ages - middle school, high school? Ever been flabbergasted by all the rules they're obeying that have nothing to do with your own?
Posted by Linda Pressman at 11:45 PM 22 comments: 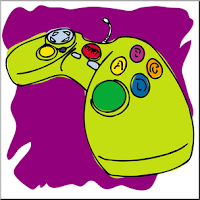 Invariably as a parent I'm caught between two opposing desires: I want my kids to have each other's backs, and I want them to tell me if the other one is doing something that puts the other kid in danger. I want them to be on the same team and to be on my team, even though half the time I'm the enemy.

The only problem with the scenario is that Daughter is a natural-born snitch. She loves catching Bar Mitzvahzilla doing something he's not supposed to be doing. She'll sneak around rooms, lurk out of sight, just about shimmy on her belly down a hallway, anything to catch him in some unauthorized activity, which, around here, could be something pretty innocuous, like playing on the Xbox when he's not supposed to.

This doesn't exactly build a healthy relationship between the kids. It also doesn't help that Bar Mitzvahzilla, a nice, mellow kid, doesn't really see this coming each time it happens. He'll be doing his favorite activity in the world, which apparently is killing the bad guys who have pretend-invaded the United States, and won't have made any attempt to disguise his activity - like there are the sounds of bombs and missiles coming from the den where he's supposed to be watching TV. Then Daughter will just happen to cruise through the kitchen  and tell me that her brother's on the Xbox.

It's extremely tempting to use a snitchy child like this as my eyes and ears, to be my spycam on the teenager. But, I know. I have to avoid that. First of all, and even if she can't see it, I need them to be friends. I need them on the same team. I'm willing to have her rat him out if it was a safety issue or risky behavior. But Xbox? I think I can take it from here.

So I tell the snitch that she has to stop telling on her brother, that she has to try harder to consider herself on his "team." The kid team, not the parent team. She gives me a stormy look and goes to tell Husband instead.

Do you have any snitches in the house? Do you find it hard not to want the information but wanting the behavior to stop? Any teenagers (or significant others) with gaming addictions?
Posted by Linda Pressman at 11:37 PM 27 comments: