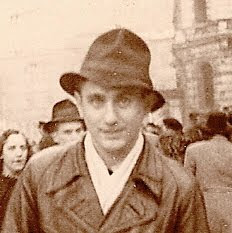 One day recently during the Momalom 5 for 10 challenge, I was sitting on my bed looking through old pictures of my dad. Daughter was sitting beside me.

I knew what I was looking for: one of the iconic images of my dad. The one in a trench coat and a hat, so unusual for a man who never wore a hat in Chicago, even on twenty below zero temperature days.

It had already been an emotional week of writing. What is it about being given writing triggers and then reading so many entries from so many people and connecting your thoughts to theirs? And I had come fresh from reading an entry from Momalom's Mom who had written about the glory of being a grandmother, about what it feels like to look at a grandchild's features and see the features of your own beloved parents there.

But then it hit me as I was looking at this picture of my father from postwar Germany, from the time period when he lived for six years in a Displaced Persons camp; it hit me that I had seen him much more recently than 1975. 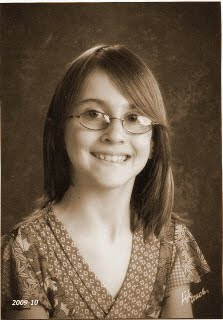 I felt confused for a moment, like I was seeing him for the first time. I looked at the young picture of him again, kind of looking at it from every angle.

Then I realized. Of course I had seen that face very recently. As a matter of fact, that face was sitting there beside me on the bed at that exact moment. My daughter. How could I not have noticed it?

I felt a little breathless. Stunned at both my blindness and my lack of vision, at the idea that I couldn't see something right in front of me, so close to me. My daughter's been here for ten years with my own father's features and I never noticed it.

I know it's just genetics, but to me it feels like something bigger, a lot bigger. Something eternal. My daughter, born in 1999, my dad, dead in 1975, and yet, completely connected.

So even though in some way I'll always be standing distressed and disbelieving in the foyer of our Scottsdale home on a miserable day in March 1975 hearing the news that my dad had died, here was proof that not all of him had. Here was proof that there was something so much bigger going on that the fifteen-year-old me could safely leave the foyer now.

Have you ever been surprised by whom your kids resemble, like I was? Do your kids look like anyone unexpected? Do you only look to yourself and your mate for lookalikes, not farther back?
Posted by Linda Pressman at 11:31 PM