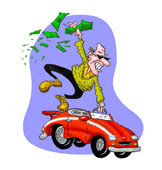 As Husband and I have aged, I've been waiting for him to have a midlife crisis. Fully expecting it, really. I've been on red alert for convertibles, for blondes, for suspicious behavior, for coming home with a gigantic toupee. Anything.

What I didn't expect - what completely caught me off guard - is that the only one in this family having a midlife crisis is me.

He turned fifty. Then he turned fifty-five. Not a blip on the radar screen. He's steady, he's loving, he's home every night. No convertibles, no blondes. Devoted to his family. Gets up everyday like a robot to work at our store. Impulsive purchase of the year? A spiffy new box truck for the store. Not really a midlife crisis vehicle.

But I am a different story. Through a combination of hormones draining out of my body and, apparently, pooling on the ground, and having a recent disappointment with my book, I found myself falling into a gloom of midlife despair. What was the answer? Maybe I needed to disappear to a deserted island for six months to work on my book. After all, all marriages involve compromise and maybe I'd been compromising my writing too much. Did I need to put my writing before my marriage?

When I was a kid in Chicago I had a lot of aunts, but there was one in particular who was a handful. If something popped in her head, she said it, no matter what, even if she thought one of us was fat or ugly or stupid, she'd say it. She was mean and scary. With my midlife menopause upon me, that's how I felt. Mean and scary. If I thought it, I said it. I suddenly understood what it must have been like to be this aunt of mine; to have almost no control over what was coming out of her mouth. Was it just reflecting the negativity that was playing in her brain?

Just in the nick of time my new bio-identical hormone pellets started working. I don't feel like I'm twenty again but I do feel a little more human. And I did some thinking about that agent and the fact that it's not really her fault that I imbued her with so much magic. She's no more magical than a hundred other agents.  The success or failure of my writing still depends on me.

Now hopefully I can get back to normal. Watching out for blondes and convertibles.

Hormones acting up lately? Midlife, early life or late-in-life crisis? Do you ever find yourself blaming every thing you've never done on someone else?
Posted by Linda Pressman at 12:48 AM