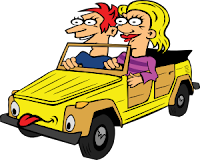 We're leaving an ice skating rink: my daughter, her friend who's been coming along on our Mom Camp adventures, and Bar Mitzvahzilla, who's in the front seat with me.
I don't like having my son in the front seat. He gets a little too excited with the world view from this unexpected position. He starts out by pressing or pulling everything on the dashboard, saying, "What's this?" "What does this do?" and then before you know it, he's reset my clock to zero, pulled up the parking brake, and shifted the car into reverse all at the same time. Or he starts fiddling with the radio and suddenly I'm listening to La Campesina, the all-Spanish station.
This time all the kids have the smoothies that I bought them at the ice skating rink. Bar Mitzvahzilla's is almost gone, but not completely. As far as he's concerned, there's a lot left. As I drive towards home, he begins fidgeting with his cup. It seems there's a tiny bit of smoothie in that cup - down in the very bottom of that cup - trapped in a forgotten crevice between the ice cubes. He's going to get it out if it's the last thing he does.
He slurps through the straw, then he adjusts the straw, first one position then another, slurping at each spot, like this is some kind of never-empty cup.
I say, "I'm sure that's empty now. Can you stop that?"
He says, "There's more in here, Mom."
So while I'm driving and thinking about the similarities between my life and a Laurel and Hardy sketch, he's shaking the ice, tilting the cup at various angles, and continuing to slurp, until finally, right when I get exasperated and say, "Can you just stop it already?" he dumps the whole cup of ice on his head.
Driving with Bar Mitzvahzilla. Looks like a man, acts like a monkey.
Posted by Linda Pressman at 9:24 PM