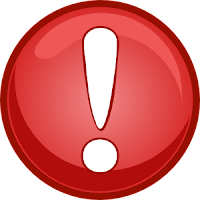 I have a reasonable amount of credibility in my family, by which I mean that if I say something happened, the people in my family normally believe me. Like if I yell out, "Scorpion!" my husband will show up with the scorpion spray, he won't come to inspect whether it actually is a scorpion while it runs away under our bed.
So, when I kept telling Husband this week that my car was having a hard time starting, since he's in charge of our cars, it would have been nice if he would have given me some credibility. Then a light came on in my dashboard that included an exclamation point. My car, normally mute, was trying to tell me something. I know the rules of writing and the use of exclamation points - they are to be used sparingly. They connote excitement, urgency. So I sat up and took notice.
The light in the dash finally got Husband moving, especially because he could finally use some of the dust-covered tools he's bought and stored in our garage. First he just got to use the tire gauge to measure the air pressure, but then, for true excitement, he got to turn on the thunderous air compressor and fill those tires up.
This afternoon, however, the car stopped moving. Husband had paid attention to the most apparent issue - the exclamation point in the dash - but hadn't paid attention to the other issue, the car barely starting. Luckily, the car worked fine for everything that I leisurely did today: exercise, shopping, a meeting, lunch. It was just when I was about to do what I'm actually supposed to do - picking up Bar Mitzvahzilla and Daughter from school - that the car wouldn't start. Because Husband is a slave to our carpet store, I had to call my mother to rescue us, which entailed her zooming over in her souped up, bare-bones Toyota Matrix, and then taking me on the ride from hell.
My mother didn't start driving until she was 34. She had a car before then, a faded red Chevy Nova, which was parked under the tree in front of our house in Skokie. She was afraid to learn to drive so it just sat there rusting under the tree while she schlepped out of the house each day with her baby buggy and shopping baskets and 7 daughters, going grocery shopping at the National store about 5 blocks away. Finally, in 1964, she learned how to drive and, as she proudly told me today while she hugged the center line, braked hard for dips in the road, and sped up as she approached red lights, she's never had an accident in 45 years. Maybe if she tries harder.
We got the kids and then my mother briefly considered letting me drive her car. It was like high school again: me, the anxious, shifty teenager waiting for the car keys to drop into my hand so I could zoom out to a boondocker in the desert. Then she shook her head. No, she couldn't risk it. I've only been driving 32 years. That's not long enough.
So she put the pedal to the metal to get us back home. After a few more close calls, we got there.
Posted by Linda Pressman at 2:24 AM