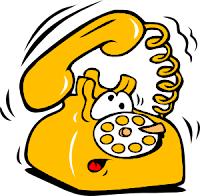 This is what my 79-year-old mother does when she wants to reach me. First she calls my home phone and leaves me a message. Then she calls my cell phone and leaves a message. Then she calls back my home phone and leaves a somewhat meaner message, telling me off for not answering the phone. And sometimes -yes - she will call my cell phone again and do the same thing.
My mother hasn't exactly embraced technology. She doesn't know how to use any type of speed dial, so she has painstakingly committed all the home, work, and cell numbers of all seven of her daughters to her memory. That's about 21 numbers for seven daughters. Throw in the numbers for her grown-up nieces and nephews and the few sons-in-law she believes are permanent (female-centric, she thinks all of our husbands are transient, even after decades of marriage), and the other random numbers rattling around inside of her head - the Social Security office, Holland America Cruise Lines - and that's a lot of numbers.
Except for a daily walk in the mall with all the other mall walkers bundled up against the mall air-conditioning, she sits in her house, falling into her concave sofa, laughing and crying along with the old Westerns blasting out of her TV set, her phone carefully placed next to her so she can answer it on the first ring or to call us anytime a new topic for nagging comes to her mind. It must be hard for her to conceive of a world in which I am not doing the same: sitting on my couch patiently waiting for phone calls.
The messages she leaves lead me to think that she believes I'm screening out her calls. She yells into the phone, "So, Linda! You can't pick up the phone? You're too good to answer the phone? I should call over and over again and you can't answer?"

When I was a kid in Skokie, my mother had the same phone problem. She was always easy to find. I'd walk in the house, look at our wall phone, see that it was missing its handset, and then follow the cord through the house to find my mother. Our original cord had been stretched and stretched till it had lost all of its loops and was miles long due to the need of this one phone to handle the whole household's calls in privacy. So I'd follow the phone cord across the kitchen, across the foyer, down the steps to the basement, and into our laundry room, where my mother would be hooked up to the phone like it was her ventilator, sewing.

Things change when your parent's older. Back then I would stand by her side, waiting for her to take a breath from her conversation, shifting from one foot to the other and watching my life pass by, just to ask her a simple question. Now she has to do the same with me, but she can't wait. She can't find my phone cord. I'm never sitting in one place sewing. So she hedges her bets, getting increasingly hysterical with each subsequent message left.

Of course, I call her back, mainly to put a stop to the harassment. I say, "Ma! Okay already! Whatever you want, the answer's yes!" And then she's happy. We chat awhile but I can tell her attention's not on me. The TV's blasting in the background with an old Gunsmoke episode. My mom tells me she can't miss this episode, she hasn't seen it since 1962. She has to go.