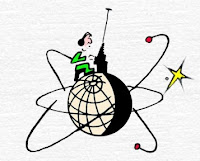 I'm on my way home one night and since my mother lives only a mile from me - about as far as the umbilical cord will stretch - I call her to see if I can swing by with some magazines.
I stay on the phone with her till I'm standing in her driveway. Then I hang up and start walking towards the door, when something catches my eye. I look up. Really far up - like up to the top of her 30 foot skinny palm tree, and I see a long orange wire hanging down from the top to the ground, where the excess is coiled on the ground, like a lasso. Then I look back up to the top of the tree and I see that the orange cord is strung from the other side of the palm tree to the house. There I see a much more troubling sight: huge antennas mounted on top of my mother's house and strung up in the air over and around it. My Stepfather's ham radio antennas. Nothing like bringing down the neighborhood.
As I approach the door, my mother starts unlocking the inside locks while I start on the outside locks. There are a lot of locks. To make sure it's me, she turns on the flashing motion detector. Finally we're face to face. I say, "Ma, look what's in your tree!"
She cranes her head around the door. She doesn't like leaving the house. In the summer it's too hot and in the winter too cold. Any opening of the door and exiting from the house is seen with much skepticism - is it absolutely necessary? Does it require a coat?
She sees the cord hanging, then she looks up, up, up, and sees the other side strung to the house. She's not surprised. She says, "That's Bob's antenna."
"How'd he get it up there?"
"He has an arrow that he shoots out."
I try to get a mental image of this for a second: my 84-year-old stepfather, who looks a little like the farmer in American Gothic, sitting in the backyard surrounded by his World War II-era ham radio equipment, suddenly leaping up with a bow and arrow and shooting a line out with pure aim, his shot true, straight through the heart of the palm fronds. Then he gets back to the ham radio and marvels as a call comes in from Russia. Imagine that! Speaking to a person on the other side of the world! What will they think of next?
I give my mom the magazines. I leave before lightning strikes and burns the place down.
Posted by Linda Pressman at 4:20 PM