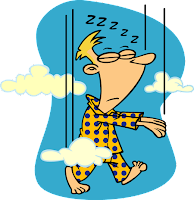 The other night I was up late when I heard running footsteps through the house. I jumped up to investigate and found Daughter running down the hallway. I followed her till she came to a stop at the door to the garage. She began fumbling with the locks, unable to unlock them. Apparently she wanted to go out into the dark garage at midnight.
Of course, I knew she was sleepwalking. Well, not sleepwalking, but sleeprunning. I instinctively knew that in her upright, but sleeping, mind, she had not anticipated encountering a locked door and that locked door might as well have been Fort Knox. Sleeping Daughter could not unlock it although Awake Daughter is quite agile. I also knew, from my family's history, that you don't argue with a sleepwalker and you don't try to wake them up. You obey them. I unlocked the door and went into the garage with her. She looked around but whatever she had expected to see wasn't in there. I took her back to bed.
I come from a family of sleepwalkers. Many nights when I was a kid in Skokie one of my sisters and I would pass each other on the stairs of our house - me going up and she going down, both of us sleepwalking in opposite directions. We did amazing things sleepwalking. She would climb on top of the tall dresser in the twins' bedroom and regale them with amusing stories until, in the middle of one of them, she suddenly fell back into a regular sleep. Her head would tilt forward and she'd nearly fall off the dresser. The twins would have to leap up from their beds to catch her. My sleepwalking was a little more boring. My sisters tell me that I'd just walk up the two staircases from the basement, sit on the edge of their bed seemingly awake, and have conversations in which I made no sense, speaking jibberish. Then I'd fall face down into the covers.
My mother, superstitious from being raised in the Old Country, knew that you never disturb a sleepwalker. Apparently, if we were disturbed while sleepwalking, we could get trapped in that in between world we were in - not awake, not asleep, mobile, immobile. So she'd go along with whatever the we wanted and then ease us back to bed. She'd get my sister down from the dresser, pick me up from my splatted position on the bed, and tuck us back in.
So this is how I know what to do the night I check on Bar Mitzvahzilla in his room and he is busy sleepwalking - well, sleepclimbing - from the top bunk on his bunkbed to his bottom bunk. I stand there, cringing, ready to catch him but not willing to bust into his sleeping world, as he places one foot unerringly under the other and makes it down.
Posted by Linda Pressman at 10:33 PM