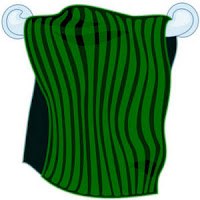 My mother calls me up. Because her TV's on so loud, she yells into the phone, "Do you have any old towels? Bob and I are going up to the cabin tomorrow and we need new towels."
Now, if anyone else asked me for old towels I'd think maybe it's for a project or for cleaning a car, or maybe drop cloths are needed for some reason. But not with my mom. Just like she said: my old towels are her new towels. She's trolling for my cast offs.
I tell her I have to think about it and I do. I have to examine my towels to see if it's time to give them away.
One time I was over at her house and I made the mistake of opening her linen closet. This is the house we bought in the wilds of North Scottsdale when our whole family moved here in 1973 from Skokie, but from looking at the collection of towels in her linen closet it didn't look like my mother had cleaned it out since the day we moved in. It also didn't look like she had left anything behind in Chicago. It was like being transported back in time. All the towels we had in the 1960s were in there. It was like a time capsule. Does my mother ever throw anything out?
I'm pretty sure my mother's never bought a towel in her lifetime. Since we owned a laundry in Chicago, maybe she got her first towels from the ones that simply showed up at the laundry loose or got separated from a customer's wash, instantly becoming part of our motley household towel collection. And here they are still: in 2009 Scottsdale, threadbare - vintage maybe.
One time, when I was first meeting my husband's family and we were staying with my sister-in-law, I was about to take a shower so I asked her for a towel. She handed me a pile of rags. I looked down at it, actually not comprehending why she had handed me these schmattas. Maybe she needed me to do the dishes before I got in the shower? Scrub the windows? The toilet? But she said, "It's your towel." I held it up and I could see through it, it was so threadbare. Both my husband and sister-in-law then looked at me completely straight-faced and said, "Towels only get soft when they're threadbare."
So, since it's obviously genetic, this predisposition to using things until they disintegrate in my hands, I guard against it by making sure I buy new towels once every two years. How do I know when it's time to get them? Easy. It's like clockwork - exactly when my mother calls asking for the old ones.
Posted by Linda Pressman at 10:34 PM