A Month of Eating 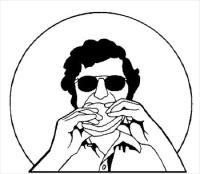 First it was the Halloween candy.  I had to be the neutral mediator between Husband and the kids in the issue of Who Gets All the Candy?  If the kids weren't willing to give Husband all the Kit Kats and the Peanut M&Ms, he was threatening to take away every bit of candy in the name of healthy parenting.

That candy lasted two weeks.  Then came some kind of pre-Thanksgiving Day sale at his favorite grocery store involving huge quantities of ice cream, again a problem with the kids.  Husband wanted all the ice cream but the kids rightfully believed that the ice cream should maybe involve them.  Again, I interceded.  Although I do think Husband gave in too easily possibly due to a hidden stash in our freezer in the garage.

Then I baked all the bananas in our house into banana bread.  That was some kind of ape festival around here but there was enough to share.

Then came Thanksgiving Day itself which, somehow, was all about the desserts.  A little turkey, a lot of desserts.

Through it all, Husband stood next to each food table, a conveyer belt nearly set up next to the food which then ascended directly into his mouth.  There was nothing he wouldn't eat.  He ate and ate and ate and then took a plate home to eat later.

And then, since there's absolutely no justice in this world, my husband, who should weigh about four hundred pounds, but actually weighs about 155, and should have gained an extra hundred pounds this month alone, noticed his pants - size 32 - were getting a little snug, so he cut back for a couple of days and got back to normal, 152.

And now onto December.
Posted by Linda Pressman at 1:00 AM