Learning How to Lust 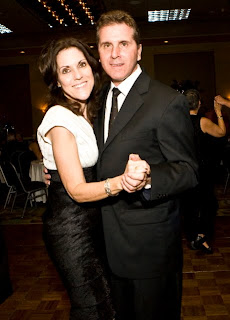 At Bar Mitzvahzilla's Bar Mitzvah
When my ex-husband and I walked into our marriage counselor's office in early 1988, the counselor quickly figured out our problem. Was it that we were sitting apart from each other? That there were no random touches or fleeting glances of intimacy? That we fought repeatedly and with unalleviated hatred?
She guessed our problem quickly. She asked us about sex.

We looked at each other like we were ten-year-olds. Sex?

Yes, sex, she said. How much sex do you have?

We hemmed and hawed our way into a lie - maybe once every two weeks or so. Yes, that was it. We nodded. Our first and only agreement in what would end up being ten months of marriage counseling.

In 1988 we actually had sex once the entire year.

The only problem was that before I met my ex-husband every time I tried to experience life as a "full woman" I erred. Used and dumped. Waiting by the phone. Dating guys who wanted me but whom I didn't want. Choosing guys for all the wrong reasons all the time.

Finally I met my ex-husband and he became my refuge. Not much in the sex department, but still. He called. He didn't use me. He would be there - like a Gila Monster, he'd be there clamped onto me.

How hard is it to leave a marriage when you've run from the sexual side of life, when you're afraid that you don't stack up, that maybe something about you just isn't good enough to have someone call and be there?  Someone normal?

I wasn't trampy after my divorce. I'd already been through my trampy phase. I was all tramped out. But I knew I needed a guy with a little oomph, some drive, some lust. I wasn't planning on laying alone and untouched on my side of the bed for the rest of my life as I had been during my first marriage.

So lust? Got it. Troublesome husband in the middle of the night? Got it. Passionate kisses out of sight of the kids but getting caught anyway? Got it. A husband who never let himself come second to crying babies, babies parked in our room, children coming to sleep in our room? Got all that.

A relationship that's strong enough, romantic enough, and, yes, lustful enough, that one day when the kids dash off to college, hopefully we'll remember why we're married.

This post is part of Momalom's Five for Ten series and the fourth topic - Lust. Click on over and join the community!
Posted by Linda Pressman at 11:25 PM