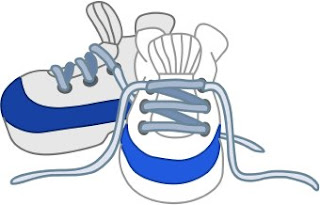 Daughter just transferred from her Jewish Day School to public school for eighth grade. Yes, her first time in public school since Kindergarten. And, happy to say, she's having a blast.

Everyday we sit down on my bed and we run through how things are going. One of her electives is PE, which she likes for social reasons but doesn't like for one very specific reason: they have to dress out each day, which means undressing in front of other girls.

So I asked, "What are you doing in there? Is it hard?"

Who knows, maybe they're running laps in the 109 degree Arizona heat?

Wait a minute. She's got to be kidding.

You mean there's no fifty foot rope suspended from the ceiling rafters and an angry PE teacher, who not only hates you but also your five sisters before you, pointing to it, to you and saying, "Climb?"

You mean there's no gymnastics horse which you have to leap over, grasping the handles, as if you're Nadia Comaneci, the gym teacher now waiting for you to fall on the other side?

No embarrassing weigh-ins called out from the scale? No lecture the first day of class about how no one should bother complaining about monthly cramps because they weren't getting out of PE and they weren't getting out of dressing out? No one-piece 100% cotton unitard gym suit that snapped up the middle and pulled when you grew? No showers looming threateningly in the locker room? No girls watching from other lockers to see if you'd worn your Monday underwear two days in a row and then hooting and hollering about it?

You mean they're teaching up to date dancing instead of the square dancing I was taught - something I have never, ever used again?

She'd better get an A.

Any traumatic childhood PE memories out there?
Posted by Linda Pressman at 11:14 PM