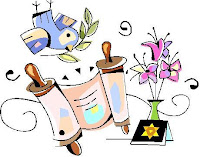 My mother came out of World War II not exactly as religious as she was going into it. This wasn't apparent right away - it became more apparent as time passed. First there was a little less adherence to being kosher, then there was no being kosher. First there was a little slippage here and there with other food, then suddenly, there was bacon on the table.
I was born into a household where Judaism was transmitted in Holocaust stories. This had the effect of sending all seven of us running and screaming from our house. For some reason, all of that horror flew in and out of my ears. I loved being Jewish. Because of this, I'm the black sheep of the family.
My mother has mixed feelings about this. On the one hand, anything that gives her bragging rights with our family back in Chicago is a good thing. So, when she wants to impress them with the idea that our family is still Jewish after 36 years in Arizona, she trots me out. She'll say anything to them - that I'm Orthodox, that I'm Ultra-Orthodox, that I moved to Israel. She's even told them that I published a book. Sometimes I love my mother's imaginary world.
But in our personal conversations, it's another thing. There, she slaps me down like a fly.
I can't say one word in Hebrew without my mother correcting me. I say the word "Ma'ariv" (part of the synagogue service) and, before she responds to what I've said, just to make me feel stupid, she corrects me, pronouncing it wrong herself, with a Yiddish pronounciation, "Moi-a-riv." She'll push the accent syllables around, anything to let me know that she was raised Orthodox in the Old Country and I wasn't.
When we were growing up in Skokie, my father made a firm decision: he was going to pay for seven weddings, not seven Bat Mitzvahs. Somehow this decision not to pursue Bat Mitzvah parties meant that we would be kept forever ignorant of every tenet of Judaism, except that at Channukah mom would pull down a teetering metal menorah, take down her one box of candles that had melted together from their spot in the cabinet over the stove, and she'd light it. Once. To my mother, Channukah was a one-day holiday, and it was always the 8th day.
So, it's nearly Yom Kippur. I tell my mother what we're doing for the holiday and she says, "You mean, 'Yoim Kippur.'" I switch to English and say, "Happy Holiday, Mom." Anyway.
Posted by Linda Pressman at 10:49 PM