Because Chris over at A Deliberate Life awarded me the Beautiful Blogger Award, I get to tell you seven things you may not know about me. Here goes: 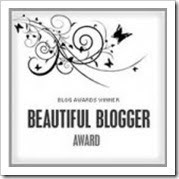 1) My mother, for some reason, named me Jane, not Linda. Then my uncle came to see me at the hospital and decided I was not a "plain Jane" (no insult intended to all the Janes out there) and decided my name should be Linda. Despite the fact that my name had already been entered on my official Cook County Birth Certificate, my immigrant mother undertook the name change all by herself: she took a pencil, picked up the unofficial hospital document with my footprints on it, and wrote in the name "Linda" above the name Jane with insert marks. This caused a lot of problems years later when I tried to get a passport.

2) Because of the Holocaust, my parents had a troublesome relationship with Judaism - like they were pretty much atheists. How I ended up being such a believing, faith-filled, goofball of a Jew is almost incomprehensible. I can only attribute it to the fact that sometimes, with Holocaust Survivor parents, you can get to a point of Holocaust Overload, when your parents have told you too many stories, and you shut down and become a blacksheep for the very thing they dislike: Judaism.

4) One time I sang sad Patsy Cline songs at the Moose Club in Las Vegas with my boss at the time who played in a Country Western band there. For just a moment I imagined a career as a Jewish Country Western star - I just wouldn't sing Jesus songs.


5) I was married once before, in 1986 at the Little White Wedding Chapel on the Las Vegas Strip with a scratchy record playing the Wedding March and holding a dusty plastic bouquet of flowers. I was divorced very uneventfully three years later at a City of Phoenix Courthouse.

6) After my dad died when I was a teenager and we lost our family business, my mom got the bright idea to get food stamps since we were flat broke. We were easily the only Jewish family in Scottsdale in the 1970s on foodstamps, and for sure the only Jewish family driving down to the food stamp office in an aging Lincoln Continental each week, me hiding in the back.


7) Bar Mitzvahzilla was born a pound and a half preemie, though he is now much, much bigger than that. He's big enough, and big-mouthed enough in fact, that after sassing off to me very badly yesterday, he wrote me this lovely apology: "Dear Mom, I am sorry for being so rude, spiteful and snide to you. It was wrong of me and I will try to never do it again. But I'm an adolescent so I may fail at that part. So anyway, sorry and I hope you can forgive me. From your only son who you will ever have that you shouldn't be mad at forever because he's your only son, Bar Mitzvahzilla" [that's not really his name, just fyi] 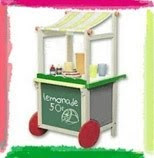 So here I'd like to say thank you to Amber over at Making the Moments Count for giving me a Lemonade Stand Award, awarded to bloggers with attitude and gratitude, because getting a note like that from my former preemie fills me with both.

Any naming stories of your own? Faith against all odds? Fertility close calls? Snotty teen apologies? (I won't ask about Las Vegas Weddings, Moose Lodges, or Food Stamps...)
Posted by Linda Pressman at 11:13 PM