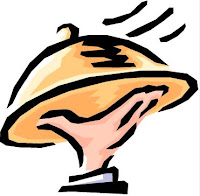 After years of proving over and over again that I can't be trusted in the kitchen, of proving that I can't actually formulate a balanced meal for my family, or calculate getting that meal to the table at precisely the time the family might reasonably be hungry, an amazing thing has happened: Daughter has started cooking.

This happened slowly. The first hint was when she'd be watching TV and, instead of watching Nickelodeon or the Disney Channel, she'd turn on The Food Network. At first I thought this was because I was so pathetic in the kitchen that she just wanted to see food - even on TV. But that wasn't it, because she was always eating while watching these shows.

Then she eagerly started watching the competition shows, the cake bake-offs, the meal in a box shows, the outdoor kitchen shows.

Finally came her demand:  she wanted to cook dinner for us. Of course this involved me doing all the chopping, Husband doing all the cooking, and her supervising from on high, the recipe/menu/idea person. She wasn't actually going to get her hands dirty or anything. Anyway, would you trust a ten-year-old with a big knife? 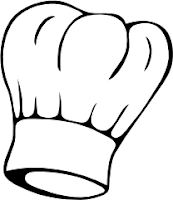 I don't know why I never took to cooking. I definitely took to eating. I guess I was just more of the instant gratification type of eater. When I wanted it, I had it, like with a spoon and one jar of peanut butter and one jar of jelly. No simmering over a hot stove for this appetite.
So Daughter made up a menu with an appetizer, a main dish, a side dish and a dessert and then she put me to work preparing, put herself to work making a secret sauce for the fish, and put Husband to work grilling. Her secret ingredient for her secret sauce? Soy sauce. She only uses soy sauce and she only makes her sauce for fish.
You know how normally when your kids give you something to eat, especially something pretend - like when they hand you a plastic burger - you have to pretend everything is really delicious? Well, weirdly enough, when Daughter's made something, each time it's really been delicious. We were wary, we were skeptical, we were reticent, but each time we've tried her recipes it's been great. Now we're eager. We sit down at the table, which must be fully set each time, and all of us are appreciative of the ten-year-old chef in our midst who's wrestled the cooking duties from mom.

Of course, we're almost out of soy sauce and our blood pressures are sky rocketing, but still.

Are there any tasks you'll willingly hand over to your kids, or that your kids are showing an affinity for already? Do you mind being pushed aside as an incompetent nincompoop? Have you tried our "secret?" Soy sauce on fish?
Posted by Linda Pressman at 12:46 PM