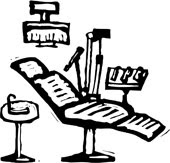 Bar Mitzvahzilla got his braces back on two weeks ago. At this point in his orthodontic career, I truly can't even keep track of exactly what's been done to his mouth. I know he already wore them once because I have a school picture of him wearing them two years ago. And, of course, I remember writing a really big check to the orthodontist.

I also remember a mounted retainer and an arch expander. I remember waiting for his molars to fall out. And I remember vague threats from the dental hygenist about how if he didn't improve his brushing, his gums were soon going to cover his teeth and there'd be no teeth left to put braces on.

After that, it was all a blur.

So he got upper-only braces this time and you would think that they had amputated a limb. Moaning and wailing, he couldn't eat. He was gumming his food, moaning, wailing, bringing home his lunch box full, and he's fourteen - the age of insatiable hunger.

I tend to be a little unsympathetic about orthodontia. After all, I spent a total of five years wired up, three as a kid and two as an adult. Part of that time was to fix the crooked chiclet teeth I'd been born with and to yank down the fangs that were growing in the middle of my head. I was happy to wear the braces then, happy to know that soon I'd look like a regular human being instead of like I might end up on display in a circus.

The second time was part of treatment for jaw surgery I had at age twenty-nine. It was especially fun to wear braces right then since it coincided with my divorce. I was easily the only woman in Jewish Singles in 1989 wearing braces like a twelve-year-old.

This inability of Bar Mitzvahzilla to cheerfully withstand discomfort bothers me a little. I can't talk him out of it by relating mine and others' many acts of courage in the face of debilitating medical problems. A teenager, he's sure he knows everything in the world. Maybe in ten years? It worries me because even though I know he's nice and caring and a wonderful kid so far, there's this thing that whines inside of him, the plaintive wail, this thing that stops him from being able to measure his pain of braces against, say, the victims of the Earthquake in Haiti.

There's no real answer. I make him peanut butter and jelly sandwiches for a while and glare at the contents of his lunchbox that keep returning day after day.  Then, when he finally gets used to it, I unzip the lunchbox one day and notice it is empty.

Do your children have the ability to handle pain or discomfort cheerfully or does the way they handle it ever make you worry about their inner character? Any orthodontic stories? Fangs?
Posted by Linda Pressman at 12:05 AM