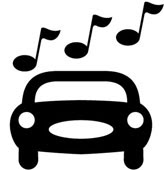 I was driving with Daughter and her best friend this weekend when the request I've come to dread came from the backseat: "Mom, can you turn on the radio?"

Okay, I really have just got to put a stop to this already. The answer from now on has to be, "No. Really I can't turn on the radio." First of all, I'm so old now that I have almost all the channels preset to NPR. And the ones that aren't on NPR were hijacked by Husband and set to classic rock or rhythm and blues stations. Either way, it's not exactly what two ten-year-olds had in mind.

They persist, telling me that they want a certain specific station, then watch as I try to use my limited brain cells to drive the car and figure out how to find a radio station. After all, I've only owned my car three years, not long enough to have mastered the scan button on the stereo. I'm lucky I know how to turn it on.

I find the station and it turns out it's Rap. This is when you know your daughter's not a little girl anymore. What, no Radio Disney? What about those nice High School Musical CDs we got a few years ago? How about Selena Gomez? Stony silence. I feel myself aging.

Here's what I remember. It was the late 1960s. Neither he nor my grandmother knew how to drive but my mother would careen over to their West Rogers Park apartment in Chicago in her tiny red Chevy Nova to get them each Saturday. Then my grandfather, with his diabetic legs that were all walked out, would sit in our house all day and into the night watching the kaleidescope of his granddaughters as we flew in and out of one door or another, running in and out of rooms, and as we played music on our HiFi system.

My grandfather would shake his head wonderingly at the noise coming out of the stereo. He'd say, "This is music?" And I'd say, "Yes, Zayda. It's the Beatles and the Monkees!" And he'd say, "Is it music or animals?" And I'd have to think.

The girls don't know that I just turned into my own grandfather in the front seat of my car. They're singing along - or talking along - with the rapper. Then Daughter's friend says, "You know, I'm not sure if this is music because he's just talking." And right then, with just the tiniest bit of wavering in the backseat, I click the radio off.

Is it startling when music you loved is suddenly referred to as classics? Do you remember relatives questioning whether the music you liked was music at all? Have you had a "generation gap" with your kids yet with music?
Posted by Linda Pressman at 11:23 PM