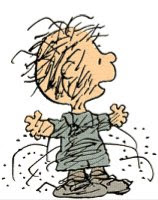 For some reason, she no longer wants to take a shower. Or a bath. Cleanliness is no longer a priority of hers. It's a priority of anyone who stands near her, however, but not to her anymore.

She used to be my good little clean child. It was Bar Mitzvahzilla who was the problem around here with cleanliness. But Daughter? She'd march right into the shower several times a week with no cajoling and no reminding. Now, if we forget, she amazingly forgets as well. And this is not a child who ever forgets anything. Then we only remember when we look at her hair.

You know how hair normally is made up of a gazillion single strands that swing and sway together in a beautiful fall from the head? Especially when you're ten and it's your own hair color and all? Well, that's not what hers looks like anymore. It looks like maybe you could fry an omelet up there. Her hair self-parts into sections. It flomps around on her head in greasy segments. It slaps down on her face and leaves a streak of oil and then she breaks out in pimples the next day wherever that flomping hair hit her.

Husband is bewildered. I'm bewildered. At first. But then my memory starts kicking up. I remember, suddenly, being ten and deciding that I'd wear a ponytail for the entire fourth grade - and I mean the same exact ponytail, no grooming and no showering. Above the hair tie was my greasy dirty hair, with like moss and weeds stuck in it and dandruff raining down out of it, and below it was my horrible secret: a huge knot that could not be unknotted. I was sure that at its miserable center there was a wad of gum or something but I thought that if I masqueraded it in a ponytail no one would notice that it was one gigantic ball of frizzed up tangled hair.

So, of course, a filthy fourth-grade year runs in the family. And since Daughter's quicker than me and sneakier, she's knows it's only a matter of time before her addled parents forget about her greasy hair and move onto other topics which we then discuss with the sound of her flomping hair in the background.

Is there any shower resistance going on in your household? Any pre-adolescent grease build-up? Did you go through this phase? Do you think your kids wait for you to forget you asked them to do something so they can get out of doing it?
Posted by Linda Pressman at 12:54 AM