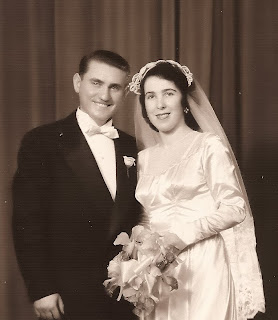 My mother and father, wedding day 1951
Once upon a time I was a fifteen-year-old with no father. This had happened very suddenly. Like as suddenly as a heart attack, mainly because it was a heart attack. My father was alive one second and dead the next.

When I was a kid and I first realized that there was such a thing called death, the first thing I thought was that I couldn't bear to lose my parents. I knew my grandparents would die one day because they seemed very old to my young eyes, but not my parents. It was absolutely beyond my imagination that my parents would someday not be there. It was something best not thought of. So even though my father had had a minor heart attack before we moved to Arizona from Chicago, I never dwelled on his mortality. He was strong like an ox, he was stubborn like an ox. The word "ox" came up a lot when discussing my father. And yet, he was gone.

At fifteen I looked around and I saw that I was pretty much alone in this strange new world of half-orphans. Everyone else my age had fathers. No one else had to redo the way they spoke, to eliminate the word "parents" from their vocabulary and replace it with the word "mother." No one else had to start using past tense when speaking of their dad.

And now it's just the opposite. The years have passed. The language has changed. When you're fifty, everyone speaks of their parents in past tense because almost no one has a parent. If we meet up at a reunion it's never, "How are your parents?" There's more gingerly touching upon the subject, a more careful question: "Do you still have your parents?"

And suddenly, the exact opposite of myself at fifteen, at fifty I'm overcome by my abundance. Somehow, I still have a mother. I'm one of the few who doesn't have to mark her life by the days she lost one parent and then the other. Beyond all reason, all my doubts, all my fears, there she is, alive at nearly eighty.

So even though there's something a little quieter about her now, and something slowing down, and something that's definitely leaving, I think of that fifteen-year-old who thought she was so unlucky, and I think of this fifty-year-old who is so lucky, really. Because eighty is good. If she almost got killed at age twelve while running from Nazis in the forest of Belarus and instead of dying she's almost eighty, that's good.

Do you remember realizing your parents were mortal when you were a kid? How distressing was that? Was there ever a time when you had to change the way you spoke about your family, due to divorce or death, at an awkward time?
Posted by Linda Pressman at 10:45 PM