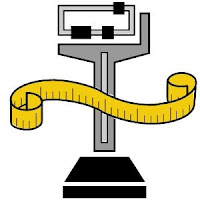 I had to go to a few doctor appointments lately. Besides the time involved, the eye-crossing impossibility of fitting something in a schedule already stretched tight, there was one other problem: the weigh in.

Scales and I go way back, to when I first got my weight problem at age fifteen. That's when I first began perfecting my scale shenanigans. The first thing I did was I always adjusted the scale at home to be a few pounds under zero. I don't remember exactly why I started doing this but I do remember that there was  some complicated math involved which took into account the times that scale had been wrong before and the difference between a hard surface weigh-in or a carpet weigh-in. In other words, just like forty is the new thirty, in my house, negative three was the new zero.

Then there was the weigh-in itself. Naked from my shower, and on twinkle toes, I approached the scale with extreme caution, like maybe it was a grenade. Near-sighted, I would get close to it to inspect for the proper negative three setting. Then, all being in order, I would flutter up onto it, first one foot and then the other, looking down - nearly blind - and ready to make a quick getaway once I saw even a glimmering of an acceptable number, even if the scale was on its way to a different one. Then I fluttered off.

I didn't have a love/hate relationship with the scale, it was pure hate/hate.

Finally, my husband put an end to my agony. One time, during a garage sale, he snuck our scale outside and sold it. Now I only get weighed at doctors' offices, whether it's once every six months or twice in one week.

So how do I prepare for a doctor appointment? Do I carefully gather all my questions about my illness? Do I gather all my available medical records and x-rays?

No, I stand in my closet and I carefully examine my wardrobe to see what I can wear that is the lightest weight. I mull over whether it would look weird to wear cotton shorts in the winter? Do I own any gauze? Can I wear a negligee? I consider it quite a milestone that I'm willing to wear clothes at all. In the elevator going up to the doctor's office I surreptitiously slip off my watch and wedding rings. My poor doctor thinks I've been divorced for years.

At the scale, the same thing always happens. The heartless nurse marches me over to the thing like a prisoner. She seems surprised by the delay as I slip off my shoes. Does she actually expect me to accept a hit of a pound or two for shoes? Then, while I literally stop breathing, she starts playing with the weights, a little up, a little down, sliding here and there. Finally it stops. I look. It's okay. Still, next time I'm closing my eyes.

What kind of games do you play with your scale? Are you the type who hops on and off ten times a day or not at all? Do you hate being weighed at a doctor's office? Do you ever try to wear lightweight clothing?
Posted by Linda Pressman at 10:12 PM