Heat By Any Other Name 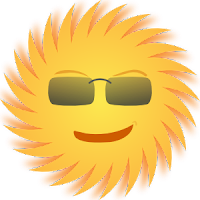 I've really tried not to write about the heat this summer. Really, what could be more boring than a blogger who lives in Arizona writing about the heat? Also, I kind of feel like I need to have a more macho attitude about it. I've lived here since 1973, folks. If I've put up with it for thirty-seven years I can take this one too.

This week, when the temperature hit one hundred fifteen degrees, the word "hot" seemed a little inadequate. Like we were saying it was hot when it was ninety - twenty-five degrees ago. For one hundred fifteen degrees there really should be a new word. Cooking terms seem strangely well suited: broiling, cooked, boiled, burned, searing. Hot isn't going to cut it anymore.
So, since my brain is literally boiling inside my head, my skin is seared when I walk aboutside, the sun is overhead in the sky burning down at me, and, as a result, my goose is cooked, I haven't exactly wanted to do much. Well, I'll admit I DO want to drop Daughter off at theater camp every day so I manage to get her there. I DO walk in my exercise class by 9:15 everyday because I'm some kind of robot-woman. But by the time the class is over it's already 104 degrees. That's it for the day.
In Arizona if you're interested in using your air conditioning at all in the summer and not paying eight hundred dollar monthly bills you end up having to do a lot of time of day calculations to determine if you can actually turn the unit on. We're on the free use between 7 PM and 12 Noon plan. So the house is lovely, even wintery, many of those hours. Husband chills the house down to 68 degrees because he knows what's coming after noon.
Between noon and seven all that 68-degree air has flown out of our paper-thin walls to the outside. Since Cheap economical-minded Husband only allows us to turn on the a/c on one side of the house or the other during this time period, I have to decide where I'll be, where the plants are wilting, the produce rotting, where the children are melting. And that's where I turn it on. I plop down on my bed and decide what I'll do. My main question: does it require thinking?
Some positives about this weather? Well, just in case I thought I bought too much clothes at one time or another, I'm actually going through at least three complete outfits everyday. That's good, right? Also, I'd been thinking about doing Bikram Yoga but I was worried about the 105 degree room. Now I don't have to worry. It will feel cooler than what I'm used to.
Right now? Weekend rates. Ah.
How hot is your summer turning out? Am I the only one whose brain appears to have melted away? Does anyone else live with these strange power bill calculations like we do or should I blame that on Husband?
Posted by Linda Pressman at 11:06 PM