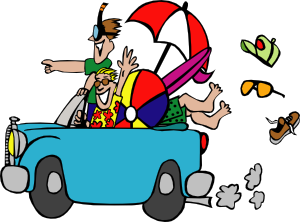 Here I am from my second vacation spot of the summer - Oceanside, California, where we go every year.

Here's what's occurred to me during this summer of two vacations, both to places we've been multiple times, places I would say we've established a family tradition of traveling to: my kids don't remember anything. Well, Bar Mitzvahzilla remembers some stuff, but Daughter? Nothing. All this painstaking building of memories, all the carefully planned birthday parties, all the awful, expensive amusement parks we've gone to. Blank.

When we were in Flagstaff earlier in the summer she said, "Have I ever been here before, Mom?" and I said, "Of course you were!" and then I rattled off a bunch of things we'd done there before while she looked at me blankly. Then here, in the San Diego area, she mentions that we always stay in Oceanside, which means, of course, that she doesn't remember all the other trips.

This could never have happened to me as a kid. First of all, we never took a trip until I was ten-years-old so when it finally happened it was very memorable. And interminable. My parents planned our vacations around all their fellow Holocaust Survivors they could find in various locales and then decided that we'd travel to those places. I spent our vacations stuck to plastic-covered couches listening to lamentations in Yiddish. I could definitely use a few light memories.

But Daughter's lack of memories makes me wonder about this raising kid thing, that I've worked so hard for so much that's disappeared into this big amorphous blob, later to be designated "happy childhood" or "unhappy childhood," or to have her whole life summarized by something I wasn't so good at, like cleaning, instead of something that I was good at, like letting her know she's safe.

Have you ever noticed that your kids don't remember things that you kind of hoped they would? That maybe you worked hard at? How has vacation gone for you this summer? Do you tend to remember a lot from your childhood?
Posted by Linda Pressman at 11:11 PM