Putting the A in Awkward

The other day we were all walking down one of the quaint downtown streets of Flagstaff on our vacation - me, Husband, Daughter and Bar Mitzvahzilla. We were all pretty normal looking. That is, with the exception of Bar Mitzvahzilla. We'd made the mistake of buying him some sunglasses earlier that day and were paying the price right then. He loped along, supercool. Shades blocking his baby blues. His body built up from a summer of football training. A swagger in his step. My boy, somehow a tough cool guy. The kind of guy I would have hated in high school.

Yet one day earlier - same vacation - we were at the hotel swimming pool and he was ready to go swimming with Daughter. He sat there next to me wracked with indecision. Should he take off his shirt? Swim with his chest showing? What about those teenage girls who were frolicking in the hot tub? Was anybody watching him? I glared at him. Aren't girls supposed to be the ones who drive you nuts? My boy, somehow as insecure as a, well,  teenage girl. The kind of guy I would have liked in high school.

Then another night we all went down for an evening dip in the Jacuzzi and there I ran into my third Bar Mitzvahzilla of the vacation.

First he frolicked with Daughter in the Jacuzzi and then in the swimming pool, playing like a seal or a porpoise, I don't know. I swear he would've balanced a ball on his nose if we'd had one. He was doing acrobatics, swim racing, and then, when we got back to the room, they staged a "death by arrow" video using the arrow Daughter had bought on the reservation nearby. The kind of boy I would have liked -  in grade school.

My three sons, all contained in one fourteen-year-old boy, for one last fleeting moment before they all disappear or coalesce into one. Into the man he'll turn out to be. 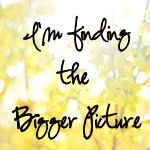 This post is part of the Bigger Picture series hosted this week by Corinne at Trains, Tutus and Teatime, where bloggers write about events which tie into the bigger themes of our lives. Please visit Corinne's blog to participate and to link up your blog!
Posted by Linda Pressman at 11:12 AM